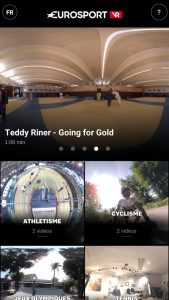 The application, developed by Digital Immersion, allows a total immersion in the world of sport, through the contents of Eurosport channel and an interactive menu updated frequently.

One video follows Karsten Gefle, a Norwegian skier who has made a career in alpine skiing before getting into freeriding. The Norwegian athlete spent fifteen winters in Chamonix before returning to Nuit de la Glisse for his 15th consecutive year.

It is therefore in Chamonix that we are following his descent: A video to be found on Eurosport VR for iOS and Android